Life - meeting places  - The village has had two previous reading rooms. The first institute was at Moss Edge and a second men's reading room was at Lanefoot cottages. This was superceded by the present village Institute, which was bought following fund raising as part of the celebration of the coronation of Edward VII.

The village playing fields are laid out on land belonging to Dallam Tower Estate and were opened in 1938.

Levens parish includes two public houses: the Hare & Hounds at Causeway End, first documented in 1714, and the Strickland Arms near the entrance to Sizergh Castle. The village had a reputedly rowdy beer house, the Royal Oak on Main Street. It closed in 1912 and is now a private dwelling. There also used to be an inn, the Duke of York, at Sizergh Fellside.

Work - The economy of Levens has always been based on agriculture, mainly a subsistence type of farming. This was greatly changed by the enclosure of the commons in 1815. Many inhabitants either owned or rented a strip of moss [a 'moss-end'] for cutting peat and growing oats. The supplementary income obtained from selling peats in Kendal gradually ended after the construction of the Kendal canal in 1819 allowed the import of coal. However, there was still a peat-dealer in the village as late as 1909.

One source of employment was at the Sedgwick Gunpowder Works beside the river Kent near Force Bridge. Accidents and explosions occurred, as illustrated in the following accounts from the Westmorland Gazette

Play - The Radish Feast
There appears to be no reliable record of when the Radish Feast originated. There are several references, but later ones may simply be repeating the earliest found, which is in The Lonsdale Magazine of 1822. The Feast was an enlargement of the traditional celebration provided by a Lord of a Manor on the occasion of the annual courts and collection of rents and dues from his tenants. [1] [2]

The Milnthorpe annual market was chartered in 1280 and held on the 12th day of May each year. The Manor of Milnthorpe was owned by Levens Hall, and so the Hall had the benefit of the market dues, and linked the market to its day for conducting the remainder of the business of the Manor. Traditionally, the Mayor and Corporation of Kendal proclaimed the market each year, and travelled to Milnthorpe with other prominent members of local society, not merely for this purpose, but also to partake of a lavish meal presented by the Lord of the Manor in the Cross Keys Inn at the conclusion of the market. Daniel Scott [3] wrote, "In the time Colonel Grahme [4] was owner of Levens Hall there was great rivalry between Dallam Tower and Levens Hall. The former once invited every person who attended Milnthorpe Fair to partake of the good cheer provided in the park, a piece of hospitality which irritated the Colonel very much. As a consequence, the following year when the Mayor and Corporation of Kendal went to proclaim the fair, he took them to Levens, and provided such a royal entertainment that the civic fathers gladly accepted the invitation for succeeding years".

The Feast was therefore in addition to the Market festivities and attendance was by invitation, at the sole discretion of the stewards, of those attending the Cross Keys "Fair Dinner" and, usually, about 200 others. In 1822 the steward, Isaac Wilson, a solicitor of Kendal, invited 58 gentlemen, and in 1833 G.B. Tovey invited 52, but the mayor and aldermen of Kendal did not attend that year and were criticised by the steward. This system of invitation was abused for it is reported that, to avoid gatecrashers, tickets were issued from the 1840's onwards. Even so it is reported that between 500 and 600 attended the 1873 Feast, including boys from Heversham Grammar School. Women were excluded, even Mary Howard, who was Lord of the Manor of Levens for most of the nineteenth century, nor would it appear that her husband attended, for in 1875 Mr. Wakefield, who had attended the Feast for 50 years, commentated that the attendance of Lady Howard's husband, General Upton, in that year was the first that he could recall that a member of the family had attended.

The Feast was a boisterous affair, beginning at about 6.00p.m. after a procession from Milnthorpe led by the Kendal Cavalry or Town Band. Daniel Scott describes the "royal entertainment" as, "long tables were placed on the bowling green, and spread with oat bread, [also known as haverbread] butter, radishes, and morocco, a kind of strong beer, for which the Hall was famed. After the feast came the colting of new visitors, and various amusements that are better to read about than witness". The Feast became part of the established social whirl of local worthies, warranting entries in regional almanacs and other publications. [5]

The Levens Hall Guide confirms, "…the oldest glasses at Levens, including Colonel Grahme's claret glasses, with rolled rims and bases, and the great Levens Constables which were used to drink Morocco ale, that indigenous brew which had to mature for twenty-one years and was given to all visitors to drink the toast 'Luck to Levens whilst t' Kent flows'.…guests were asked to cross the bowling green in a straight line after drinking the potent Morocco ale. If they succeeded they were given another glass and no-one was known to make the return journey successfully". In 1822 the Lonsdale Magazine reported, "punch and Morocco were handed liberally around and bread and butter and reddishes (sic) vanished with great rapidity. The various sports which are regularly kept up on that day as remnants of the feudal times, gave great pleasure to the respective parties. After the sun had retired, and the shadows of the evening drew on, a variety of songs and numerous tracts kept the gardens alive till nearly ten o'clock when the company separated highly gratified with the day's amusements". 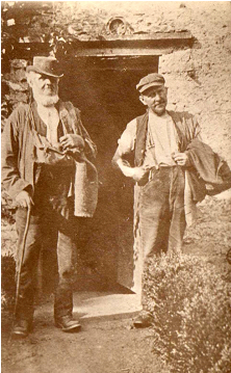 ​The radishes had to be specially grown on flannel strips over hotbeds under glass frames. So many were required that it took four men all the previous day to gather and wash them. In 1873, the Westmorland Gazette congratulated Mr Gray, the gardener, for the "long capacious tables to groan under the weight of an immense show of long, short, white and red radishes". Pictured here are Mr. Joseph Pennie and Mr John Butterfield in about 1900. Both were gardeners at Levens Hall and it may be possible that they helped to grow the radishes for the Levens Radish Feast.

The Lonsdale Magazine account records that the sports began with "colting". A colt was someone who attended for the first time and to gain full membership of the feast the colt had to stand on one leg and drain in one draught about two pints of Morocco from a Levens Constable - a special glass, rather like an elongated lager glass – and recite the Levens toast.
​ If any remained in the glass, any one of the company could refill it and compel the Colt to drink it 'at one wind'. Defaulters had to pay a fee of 5s. The sports which followed were generally held on the bowling green but in the 1860's they were transferred "to the west side of the moat (sic)". Bowls, wrestling, races [the 150 yards] and jumping were the main events. In 1822 there was also pitch and toss, wrestling with the staff, and leaping the gad. The main race was one in which "one of the racers engaged to run twice over the green while his opponent carried his friend (a person of about fifteen stone) once over". Late in the day a favourite competition was to cross from one gap in the central beech hedge circle, either in a straight line or to another exit specified by the crowd, whilst blindfold. A failure to complete resulted in more default drinking. In 1852 a "judicious improve–ment" had been made in the apparatus used to measure the jumps for, instead of rough posts, two deal staves had been manufactured by the Levens Hall joiner. It was reported that "the strange device managed to measure a jump of five feet by Mr W. Huddlestone".

In addition to that in the Lonsdale Magazine, another personal account, that of Mr J D Burrow of Hill Top, Crosthwaite, who attended in about 1880, has been recorded.[6] He drank the Constable full of Morocco Ale whilst stood on one leg and reciting the "Luck to Levens" toast. He recalls the penalty for failure as a payment of one shilling to the gardeners. The onlookers tried to make him laugh and so force payment of the forfeit. "It took some doing to drink it when you'd been chased all over the place first before they could catch you, and then you had to stand on one leg". Well into the night the cheerful throng sang loudly and then headed home, many making the journey to Kendal.

The Morocco beer was brewed to a secret recipe. It was said to be kept 21 years before it was tapped, and that it was so fine a drink that the last drawn from the barrel was better than the first. This was caused by a thick crust forming upon the surface, which followed the beer down the barrel preventing air from contaminating the beer. The legend is that the recipe was brought back by a crusader from the Holy Land, and was so highly valued that, during the Civil war, it was boxed in lead and buried in the garden.[7] The secret brew was said to include not only malt and hops, but also meat in its preparation. E.M.Wilson describes it, "The beer was dark, poured like oil and tasted mild as milk in its treachery".

The Radish Feasts were only interrupted occasionally, as on the deaths of Colonel Howard in 1846, Lord Ternpleton in 1863 and Mrs Howard in 1877. However, just as there is no certainty of the origins of the Feast, there is similarly no consensus as to its demise. An anonymous author [see here] states the Feast was held until 1877, but, as Bingham describes, it appears that threats to this male bastion were predicted in 1873, "as the times were full of agitation for change when women have already attained seats on School Boards and, if ratepayers, are eligible to vote in municipal contests and who knows that they may succeed in breaking down the barriers that have been effective against them at Levens". The Feast was suspended in c.1880 and in 1888 it was said to be a thing of the past. No one knows why; it probably was not on the grounds of expense, but it possibly ended because Captain Bagot was concerned that, as an MP, the often drunken and exuberant revelry might lose him some support. As E.M.Wilson comments, "The prospect of free beer seems to have been too much for the rowdier part of the population of Kendal, and in its last years the gate-crashers swamped the Radish Feast".

The most detailed history of the Radish Feast is contained in Roger K Bingham, The Chronicles of Milnthorpe, Cicerone Press, Milnthorpe, 1987 and most of the quotations from the Westmorland Gazette are taken from this publication.
The Lonsdale Magazine and Kendal Repository, No. xxxiv, Vol. iii, October 31st 1822, p363.
Daniel Scott, Bygone Cumberland And Westmorland, Kendal, 1899.
This was from 1687 to 1730.
Wilson”s Household Almanac 1872, Wilson. Highgate Kendal and Rowe, Notes and Queries.1852; s1-V: 610
E.M.Wilson, A Westmorland Initiation Ceremony, Folklore, Vol 51, No 1 (Mar 1940), pp74-76
J.F.Curwen, Historical description of Levens Hall, Kendal, 1898, pp 36-7
top
Page last updated July 2008