In 2009 the manager of the National Trust’s Sizergh Estate asked their regional archaeologist, Jamie Lund, to carry out an Archaeological Landscape Survey of the estate. The National Trust undertakes this type of survey in order to find out more about its properties, how they have changed and developed over time, and what forms of special conservation management they require. Jamie looked to establish a working partnership with local people through Levens Local History Group (LLHG) and the volunteers working at Sizergh Castle to involve them in the archive research and field survey. He came to talk to LLHG about the proposal in February 2010 and fired our enthusiasm. 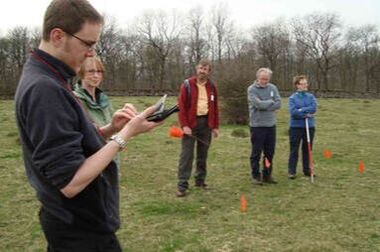 ​This was followed by a practical afternoon session looking at some of the Prehistoric archaeology on Sizergh Fellside, experiencing the methodology in practice and getting used to using the survey equipment.
​Action!

The first phase of the investigation was desk based. We provided what information we already had in our own archive and some of our members worked with a professional archivist from OAN to identify information relating to the Sizergh Estate held at Kendal Record Office.
​By May the volunteers involved in the archaeological survey were organised into four teams of either five or six, and allocated a survey area each chosen to include some areas of high archaeological potential as well as a good contrast of landscape types – woodlands and meadows or limestone upland and parkland for example. It was anticipated that each group would complete their survey area working one day each week for five weeks. The methodology was to walk the allotted area and once a site of archaeological interest had been discovered, it was then closely examined to determine its form and extent, before a written description was made using a standardised site recording form. As part of the recording process, each archaeological site was photographed with over 800 digital images being taken, which form a detailed record of the archaeology encountered.
Results

In simple numbers as a result of the field survey and documentary research the number of recorded archaeological sites increased from 336 to 598, spanning human history from the Neolithic to the present. The existing known archaeology was re-measured, re-recorded, had its position fixed by GPS and was photographed. A prominent mound, similar to the one on Sizergh Fellside , and which seems to have escaped antiquarian investigation [there are no records of it ever bring opened], was recorded in the northern part of Brigsteer Park. Two other possible Neolithic burial mounds were also found. Another discovery was of a burnt mound, believed to date from the Bronze Age, and similar to two examples found in Nether Wasdale last year.
We believe that this grant facilitated the creation of the park referred to as Sizergh Park located immediately west of the River Kent. Twenty five years later in 1361 Sir Thomas de Strickland was given a license to impark his woods and lands in Helsington, Levens and Hackthorpe. This more general license we believe saw the creation of Brigsteer Park and Larkrigg Park. Alongside this strong documentary evidence there now is archaeological evidence in the form of a 200m section of 9m wide probable deer park boundary surviving in Low Park Wood, as well as a large earthwork bank running through a pasture field [both features suggesting a large deer proof boundary enclosing a Medieval Park], and two pairs of massive gate stoops associated with the Medieval Park and a possible deer shelter were also identified.

A new deer park was created, probably during the seventeenth century, in front of the castle. It is this park that is now referred to as Sizergh Park and is the one you drive through today when visiting and which shows evidence of nineteenth century designed landscape features that document changing fashions and possibly the keeping of sheep and cattle in the park, rather than deer. By this time the other medieval parks had lost their deer park status and were now woodlands managed as coppice and standard for commercial return. A six to seven foot high wall was identified and dated to 1713.

Different types of industry were also found, including peat cuts, peat stores, gravel pits and limestone quarries. By far the most numerous site types encountered were limestone quarries, most likely to have been worked for walling stone, with many quarries being located alongside dry stone walls. A number of larger, deeper quarries may have yielded building stone, while a handful of others may have produced limestone pavement for use on the estate. Two well preserved lime kilns and two ruined lime kilns were recorded.

Jamie and Peter presented their preliminary report to LLHG and the National Trust volunteers at a meeting in October, and the full report is presently being prepared for publication before the end of February 2011.

All participants believe the survey to be a great success. NT has greatly added to its knowledge of the estate, an invaluable tool in its day to day management, and has become confident in identifying the boundaries of the three deer parks at Sizergh. From LLHG point of view our members have gained substantial skills and experience through the survey.